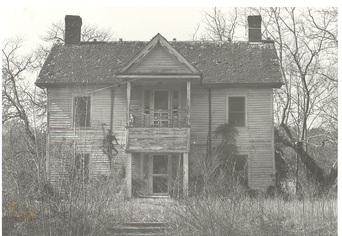 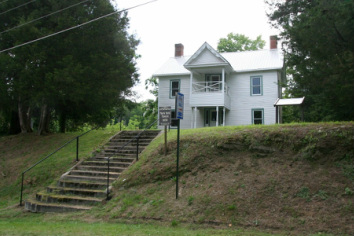 2012
This building built around 1830 by Mark York served as a social center for visiting travelers, law students and guests. Located on .60 acres, the Tavern is a two-story frame building, with interior end chimneys with corner fireplaces. Although the building was somewhat altered in the early 1900’s, a Federal style stair, six-panel doors and several Federal mantels remain. It was in extremely poor condition when donated to the RPS, Inc.  The structure is approximately 1200 square feet, two floors with four rooms each. Each room contains a corner fireplace adding to its architectural charm. There is a porch extending from the first and second floors with access into the main foyer and upstairs landing.

2011: New tin roof, all window sills repaired/replaced/reglazed and new glass where needed. Another layer of subfloor throughout interior of building. Touched up all paint and new window trim.

2007: Exterior repair, lapboard replaced and paint on front of Tavern.

2005: Repaired tin roof of Tavern and secured rest of downstairs windows, with board covering. Repaired chimneys with new mortar.

It is proposed that no plumbing be installed in the existing structure due to the potential disruption of its original architecture and limited space for bathrooms and/or kitchen. Consequently, it is proposed to establish this shell structure for full-time occupancy by tenants.  Future planning may call for the addition of a kitchen/ bathroom facility behind the building capable of supporting a food-service entity. There is an existing well on the property to provide potable water to this structure.  The property has open space at the rear of the building that can be utilized for parking, events or general use. The historical and architectural value of the structure will be maintained while installing new electrical wiring, HVAC, and insulation to meet current standards. Once completed, visitors will enjoy the simple design of the interior, the corner staircase, and the corner fireplaces.

The Remember Rockford campaign will need to raise an estimated $200,000 for overall improvements to the building.
The next priority will be electrical, floors put back down, insulation in walls, walls put back on.  Fireplaces rebuilt and mantles re-installed.  Estimates for these improvements will be approximately $100,000.  We will be able to begin as soon as funds become available.