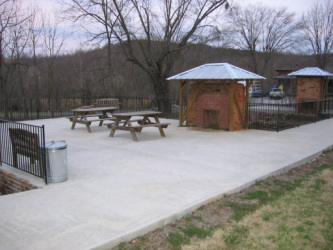 In 1796, Reuben Grant obtained a permit to operate a tavern and hotel, where Aaron Burr once stayed. Nearly a century later, John G. Burrus purchased the site, built an addition to it, and operated it as the Grant-Burrus Hotel from 1890 to 1925. The hotel housed numerous visitors to Rockford during its heyday when the passenger train stopped in Rockford.  The structure was destroyed by fire in 1974, and one decade later, the Surry County government required the wooden remains to be burned due to safety concerns.

In 1988, the Woodrow Burrus family donated the site to the Rockford Preservation Society. The historical significance of the property is the foundation and cellar fireplace of the original Reuben Grant Tavern. That intact fireplace is where food was prepared for visitors.  This area has been stabilized and preserved as the centerpiece of our park. The site is approximately one acre. The four original chimneys of the hotel remained standing until 2006. After reviewing options offered by an official with the Archives & History Division of the Department of Cultural Resources, the RPS decided to take the chimneys down to a safe level and to create a park platform on the original footprint of the building.

2009:  Landscaping continued at the park to make it more beautiful by Rockford resident, and volunteer, Sharon Elmore.

2008:  Wrought iron rails were installed, shelters were built and installed over two remaining chimneys and a new roof put on the outbuilding on the property.  A dedication ceremony was held to commemorate the new park.

2007: The bricks from the old chimneys were individually selected and cleaned for reuse on the wall of the platform. Platform walls were built, concrete was poured and custom, wrought-iron rails were ordered.

2006: Began work on the park site by having the chimneys taken down to a safe level.

2005: New “Sensitive Historic Area” signs were placed at the hotel site. There was a successful volunteer day to clean up the site.

Lighting will be installed around the platform.  General parking for the area is at the southern entrance of the property off Old Rockford Road. However, parking will be limited due to space constraints and a commitment to maintaining green space that can be utilized for picnics and general seating for special events, festivals, concerts, educational presentations and tours.

Thanks to grants and generous donors, we have been able to almost complete this project at an approximate cost of $25,000.

Next on our agenda for the Rockford Park is pole lighting.  Needed funds for these improvements will be approximately $3,000.  We will be able to begin again as funds become available.